The Controversial All Stars are a wedding band in Ireland led by Dave Browne of Irish power-pop band PICTUREHOUSE fame. Dave has played live to over one million people worldwide and has racked up 12 top twenty hits in Ireland, including; SUNBURST, HEAVENLY DAY and EVERYBODY LOVES MY GIRL. He has also headlined the Irish football teams homecoming gig to 100,000 people in the Pheonix park Dublin and has played with Bono, Joe Elliot (Def Leppard) and Tom Jones whilst he has toured the world with Meat Loaf, The Corrs, Bon Jovi and Texas, to name but a few.

They also boast the female vocals of the voice of Ireland finalist Ingrid Madsen. She has also toured the world with the hit Irish show The women of Ireland.

The rest of this fantastic band are made up of Ireland’s premier musicians all of whom have toured the world with the likes of The Lord of the Dance, Cathy Davy, Mundy, Van Morrison, The Corrs.

The Controversial All Stars play in Bruxelles Bar off Grafton Street every Monday night. Please call us in advance just to double-check as sometimes we play on weddings on Monday.

Be the first to leave a review. 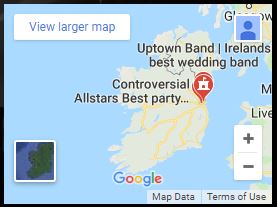